I believe after a year long of missing-in-action this blog needs to be reinstated. It started out as a stand-in website for Hougang United FC when it re-branded itself in 2011. But when the club finally got it's website done up, this blog sought of became obsolete.

But then again, it's would be such a waste to give this blog up since compiling over 2 years of football material. And I shan't let it go just like that.

Therefore, I have decided to re-open a new chapter for this blog and try my very best to update this space with news regarding Hougang United.

For now, I'll be looking forward to the merchandise of 2014 Hougang United kit. Rumour has it that the club has already secured it's apparel for 2014 and that the colours will return to orange and black. Thank God.

LATW - Lions All The Way crew's second edition of Don't Forget Your S.League Day is here and Hougang HOOLs is proud to be part of this initiative!

Details: This year, the event will be decentralized. After collecting the unique flyers for each clubs, fans of every club can go back to the neighbourhood where their favourite club is located and distribute the flyers to GAIN AWARENESS on the S.League and their clubs.

For example, fans of Hougang United will take the flyers back to e.g Hougang estates/ Hougang Mall. Strict rules will apply as accordance to the law and no flyer shall be distributed inappropriately like putting on people's cars! For those who are interested, do indicate in this post or in the Lions All The Way crew fan page; and just meet up at City Hall MRT on the date and time and look our for the LATW crew members :) 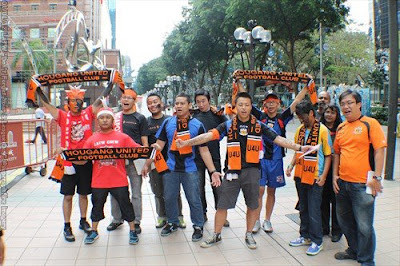 UPDATE: In a story reported by The New Paper this morning, Woodlands was alleged to have fallen into financial hardship when the tabloid quoted a source close to the Football Association of Singapore which claimed that the Rams were unable to show their financial plan for the 2013 S.League season. However, Tay rubbished the report and commented that all players, coaches and staff were paid on time throughout the season, suggesting that the Rams were in fact, in stark contrast to the earlier report, pretty much in the pink of health financially. (SOURCE)

Our fellow friends in Woodlands Wellington are gathering to rally support and create awareness for the plight of their illustrious club.

As per Hougang HOOLs tradition and founding principle, we stand in solidarity with our fellow like-minded S.League fans from the north, and once again ask our fellow Hougang friends to be with the Woodlands friends - like the legendary Hussain Razzak (leader of the Black Sheep) - to join them in the rally.

We the Hougang HOOLs want the Woodlands Wellington, and the good fans of Woodlands, to continue to survive, thrive and contribute to our Singapore football, our S.League, our community. Do not let any recent undesirable element within the club to deter us from that founding principle to stand by them, it's the right thing to do.

See you tonight at Woodlands, cheers!

On behalf of Hougang HOOLs 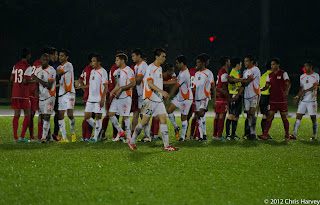 It was a friendly game against the Singapore Under 19 team, who is representing the Lions City in the upcoming NEX Cup tournament, facing the world famous academies of Manchester United, Liverpool and Sporting Clube de Portugal.

Aide, who first joined Hougang's predecessor Sengkang Punggol as player in 2007, then turned coach in 2009, following the dismissal of Jorg Steinbrunner. He had a memorable season in 2011, where he led Hougang to their best placed finish in the S-League so far, and led the Cheetahs to the League Cup final and fourth place in the Singapore Cup.

By Kenneth Tan
Goal.com
The 2012 S.League season may have just ended but for an aspiring club like Hougang United, preparations for the 2013 season is already underway.

18 men were gathered for their first pre-season training on Monday evening at the Khalsa Association and there were plenty of new faces spotted, although regulars like Ridzuan Fatah Hasan, Mamadou Diallo, Hasree Zais and Basit Hamid were missing due to personal reasons.

With Guinean striker Diallo the only one retained from the foreign legion of 2012, there will now be space for four more foreigners to join the 2013 team.

Five foreign trialists were spotted gearing up during the training session as they vied to impress new coach Alex Weaver.

Among the five, there was a familiar face in Adrian Butters. The towering centre back made 10 appearances for Woodlands Wellington last season before leaving in the mid-season transfer window.

Cheers all around at Awards Night

By Kenneth Tan
S-League
Fans, officials and players of the S.League fraternity came together for a time of joy and celebration at the Great Eastern-YEO’S S.League Awards Night 2012, which was held at ITE College East on Sunday evening.

And it was an occasion that saw accolades go out all around, as players, media and even sponsors walked away satisfied with what they had enjoyed at the end of the event, which ran smoothly for a little over two hours.

Unlike the case in previous years, the annual marquee event to celebrate the finest achievements of the fraternity was held in a school-setting for the first time – with the ceremony held in the spacious ITE College East auditorium and most ably hosted by ESPN presenter Colette Wong.

And it was a mixture of experienced faces and new men earning honours for the 13 awards that were presented for the night.